Phoenix New Times:  “Maricopa County Attorney Bill Montgomery launched a fresh appeal this week in a lawsuit he believes could overturn the state’s medical-marijuana law.  This time, though, his office will be going it alone.  Arizona Attorney General Mark Brnovich has chosen to side with Arizona voters.  On Tuesday, Montgomery filed a petition to the Arizona Supreme Court in White Mountain Health Center v. Maricopa County, keeping up a fight he began in 2011.”

The Trump Administration’s View on Marijuana?

National Law Review:  “The incoming Trump Administration may usher in a more hostile climate to state efforts to legalize the sale and distribution of marijuana and products that contain the drug. . . . Below we examine the positions taken by President-elect Trump and his nominee for Attorney General, Senator Jeff Sessions, on (1) medical and recreational marijuana, (2) states’ rights, (3) attitudes toward marijuana use, and (4) enforcement of federal drug laws.  President-elect Trump has made it clear that he supports medical marijuana.”

Sean Spicer: Trump May Crack Down on Recreational Pot

In addition, MKHS has issued to the Company a US$1,212,500 Promissory Note, Loan Agreement and Guaranty that secures repayment of previous advances (collectively, the “Arrangement”). This Arrangement supersedes and replaces the Company’s previously described investment in MKHS and settles all outstanding issues between the parties.

As a result of this Arrangement, MKHS will complete the buildout of the 28,000-sf Farmtek greenhouse expansion, as proposed and funded by the Company in 2016 (the “Buildout”). In accordance with the PSA, payments of US$60,000 per month for management services (“Management Services”) will commence to the Company upon completion of the Buildout, with the initial three month’s payments to be deferred and paid at the end of the third month following Buildout to allow for an initial harvest. In addition, the Company will provide consulting services (“Consulting Services”) to be performed and invoiced monthly, and will be reimbursed for approved out-of-pocket expenses
and sub-contracted services.

In accordance with the Arrangement, loan interest accrues at the rate of 15% per annum commencing May 15, 2016. Principal and interest, as well as US$30,000 in cost recoveries for past accrued fees, shall be payable to the Company by MKHS in arrears commencing at the end of the third month following Buildout, and on the 15th day of each month thereafter over a 5-year term.

Tucson Weekly:  “Arizona lawmakers seek greater control over marijuana and ballot initiatives. It seems too much pot is giving Republican state lawmakers an identity crisis as they keep trying to pass greater regulation on the Arizona marijuana industry.  Southern Arizona Rep. Vince Leach introduced a bill that would restrict dispensaries in rural areas from relocating to the cities

As of February 11, 2017, four companies that applied for Arizona medical marijuana dispensary licenses during the 2016 application period and whose applications were rejected have sued the Arizona Department of Health Services.  Each plaintiff alleges that its application designated a location for its medical marijuana dispensary that complied will all requirements of applicable local zoning ordinances, but the Arizona Department of Health Services awarded licenses to applicants whose dispensary addresses did not meet all applicable zoning ordinances.

3 SL Family, LLC, applied for a dispensary license in CHAA 78 in Ahwatukee.  The complaint alleges that DHS awarded the dispensary license to an applicant whose dispensary will be located at 10835 S. 48th Street, Phoenix, Arizona.  The complaint alleges that the location failed to satisfy the zoning requirements of applicable law and that DHS should have rejected the application for that location.

The complaint asks the court to order that the licenses awarded by DHS with respect to CHAAs 40, 58 and 78 be revoked and issued to an applicant whose application complied with all requirements.

Premium Leaf applied for a dispensary license in CHAA 70 for a site located at 98 N. Power Road, Mesa, Arizona.  Premium Leaf claims that its location is the only location in CHAA 70 that satisfied all zoning requirements and therefor DHS improperly awarded the license to an applicant that should have been disqualified.k  The plaintiff asks the court to issue a permanent injunction that revokes the license DHS  granted for CHAA 70 and award it to Premium Leaf.

“the purchase price of US$25 million . . . will be satisfied by a cash payment of US$15 million . . . subject to adjustments, and a promissory note in the principal amount of US$10 million . . . payable to the Sellers. The Promissory Note shall have a three (3) year term and bear interest at the rate of eight percent (8%) per anum”

EBITDA means “earnings before interest, tax, depreciation and amortization.”  If the 3/31/17 EBITDA will be $6,600,000 then how would the dispensaries satisfy the “not-for-profit” requirement of Arizona’s medical marijuana law?

The Canadian Bioceutical Corporation issued a press release on January 24, 2017, that states:

“it has appointed Elizabeth (Beth) Stavola as President of the Company’s wholly owned subsidiary, CGX. In her new role, Ms. Stavola will be responsible for the operation of the Arizona business, as well as the Company’s other U.S. operations. . . . Ms. Stavola is also the founder of . . . Health for Life Inc.”  Emphasis added.

I don’t know what CBC’s press release means by calling Ms. Stavola a founder of Health for Life, Inc., but she was never an officer or director of the corporation according to the records on file with the Arizona Corporation Commission.  Nor did she sign the Articles of Incorporation that formed the nonprofit corporation.

Note CBC’s organizational chart shown below says that CBC’s two Arizona medical marijuana dispensaries are Health for Life, Inc., and Soothing Options, Inc., both of which are Arizona non-profit corporations. 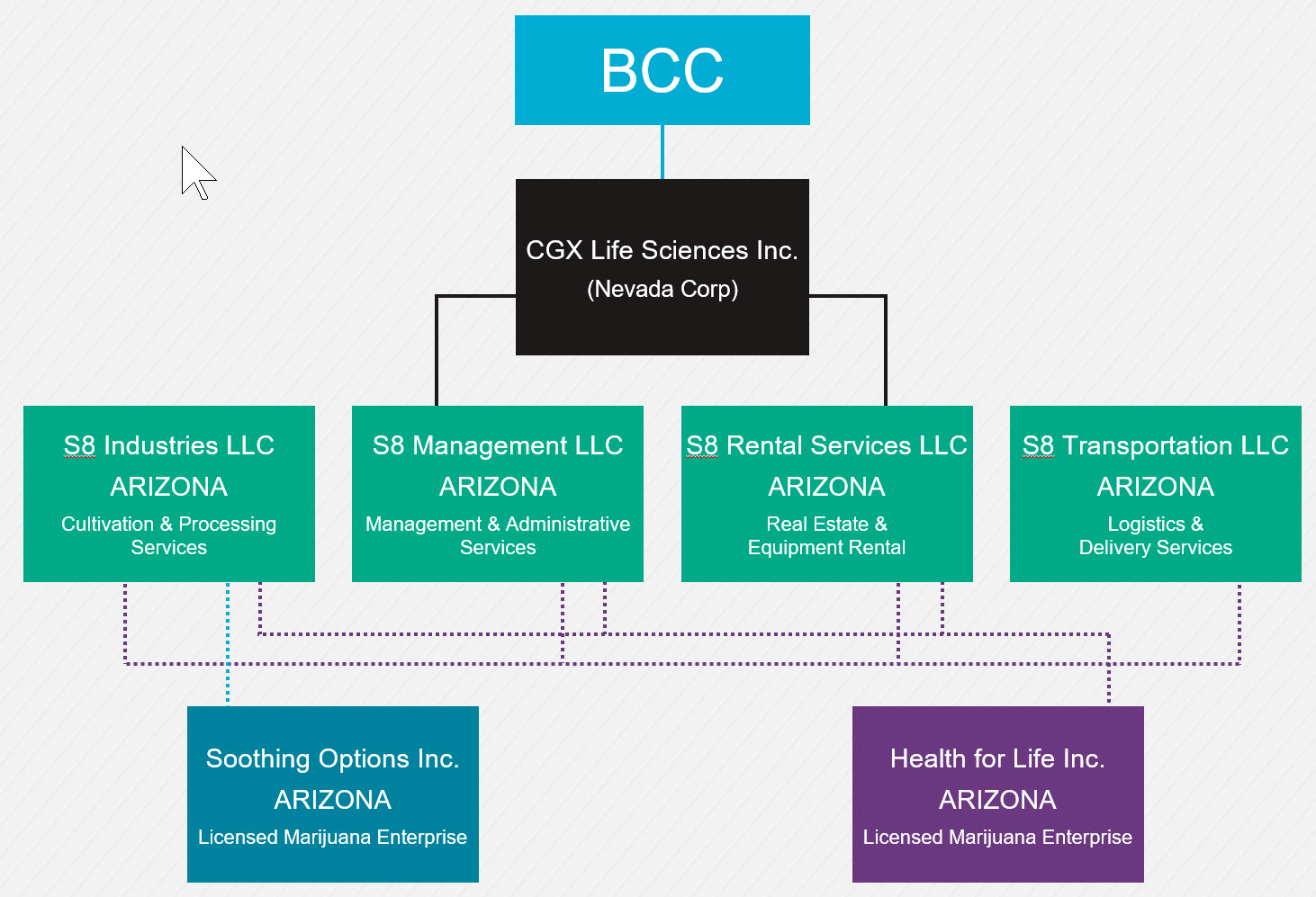 Here is a summary of the people involved with the Arizona companies named above as set forth on the Arizona Corporation’s website.

This transaction raises the following questions:

1. Why would anybody pay $25,000,000 or any substantial amount of money to be able to “exert considerable influence” over two Arizona medical marijuana dispensaries that by law must operate on a not for profit basis?

2. Who gets the $25,000,000?  Is it Health for Life, Inc.?  If so, then what does H4L, a not for profit corporation, do with all that money?  If it wasn’t H4L then who gets the money and what is it for because an Arizona nonprofit corporation does not have owners (shareholders)?

Apparently the not-for-profit Arizona medical marijuana dispensary business can generate a lot of  money for somebody.